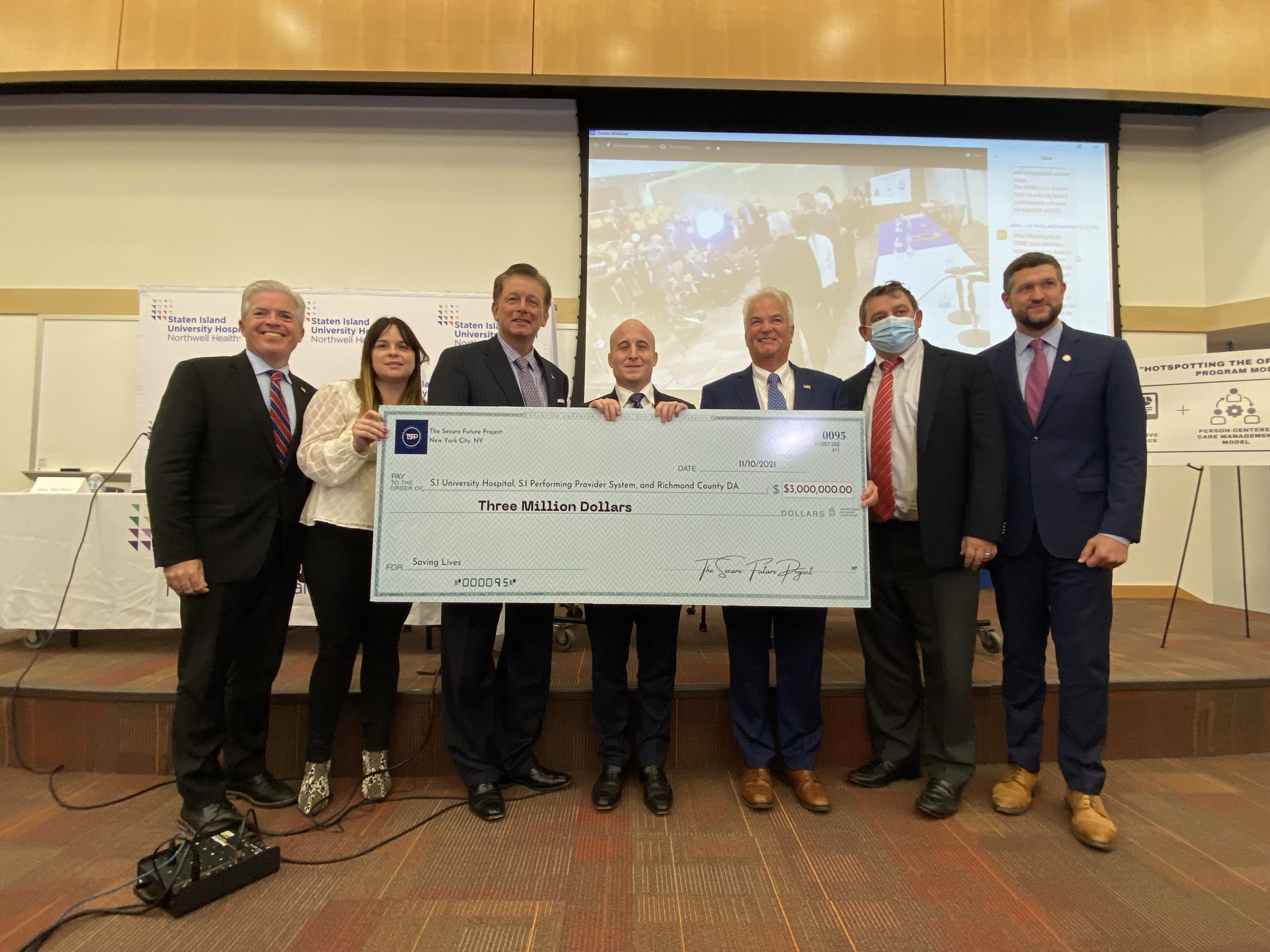 Staten Island, NY, NOVEMBER [10], 2021 – In the face of an unprecedented 50% increase in overdose deaths across the United States, the Staten Island Performing Provider System (SI PPS) and partners announced a game-changing $4 million investment to combat the opioid crisis, funded both by Northwell Health and by a $3 million grant from the Secure Future Project and its founders.

The grant—provided by The Secure Future Project and its founders, Fabienne and Doug Silverman and Jennifer and David Millstone—will launch “Hotspotting the Opioid Crisis,” a data-driven program designed to provide high-risk individuals with peer-centered, recovery-focused care. This program will be implemented by SI PPS alongside local treatment providers and the Office of the Richmond County District Attorney, with the goal of providing care before, not after, an opioid overdose.

In collaboration with the MIT Sloan School of Management, SI PPS has developed a predictive algorithm to focus the initiative’s efforts on community members who are most at risk of suffering from an overdose. Many of these individuals have been inadequately engaged in care, have left treatment programs, or have been impacted by system-wide issues such as a lack of access to in-person services. The “Hotspotting the Opioid Crisis” program will deploy fully-funded teams whose sole focus will be on preventing opioid harm by engaging and coordinating these high-risk individuals in their recovery journey, thereby improving outcomes and delivering value to the health system.

County Executives Pat Ryan of Ulster County and Steve Bellone of Suffolk County also announced that they will actively explore the adoption of the “Hotspotting the Opioid Crisis” model in their respective counties. ushering in an exciting new state-wide paradigm for combating the Opioid Crisis in New York.

Former New York Congressman and The Secure Future Project Senior Advisor, Max Rose notes, “Next year, more people will likely die from the Opioid crisis than COVID. This is a crisis of the gravest proportions which demands not more of the same, but an innovative, bold, and data-based strategy. The Secure Future Project is honored to be supporting this hotspotting pilot not only because it will save lives on Staten Island, but also because it will set the framework for a new statewide and nationwide model to combat this horrific epidemic. In short, because of this amazing investment and partnership, lives will be saved and healthcare provision will be transformed.”

“For more than two decades, the opioid crisis has ravaged New York, taking thousands of lives and tearing apart countless families,” said New York Attorney General Letitia James. “By intervening before it’s too late, SI PPS will serve as a vital resource for the people of Staten Island and will help stop high-risk individuals from falling through the cracks. I am confident that the $4 million investment being announced today by The Secure Future Project and Northwell Health will work hand-in-hand with the hundreds of millions of dollars my office has already secured for New York City to tackle this epidemic. Just as I have worked tirelessly to end the devastation from opioid addiction, SI PPS is doing incredible work to combat the opioid crisis and protect New Yorkers.”

“The opioid epidemic has wreaked havoc on our region, causing heartbreak for far too many families,” said Suffolk County Executive Steve Bellone. “As we work to end this pandemic once and for all, I have already spoken with Northwell Health about the possibility of bringing this innovative, data-driven initiative to Suffolk. I believe this approach can make a real difference, and I’m recommending the program architects present before our Opioid Task Force for consideration in Suffolk County.”

“We know that the pressures created by COVID-19 have led to an increase in opioid overdoses and fatalities in Ulster County and around the nation,” Ulster County Executive Pat Ryan said. “In light of this, we must double down on our efforts to combat the opioid epidemic. In Ulster County we are expanding our High Risk Mitigation team and using our recently received opioid settlement funds to combat this crisis. I am confident that these initiatives along with programs like the Hotspotting the Opioid Crisis model⁠, will help to save lives.”

“This is an exciting and unique collaboration with SI PPS that could result in a significant amount of learning—not just about what works, but also about how and why it works and how it can be adapted and scaled to other groups,” said Dr. Anne Quaadgras, director of MIT Sloan’s Initiative for Health Systems Innovation (HSI).

“The majority of the tools available in our criminal justice system are reactive, yet for anyone battling a substance use disorder, particularly as fentanyl has become even more prevalent, failing to be proactive is too often the difference between life and death. That is why this initiative is so important, because identifying those at risk and deploying resources, including peer recovery coaches, to work alongside them and connect them to services before they suffer an overdose, will undoubtedly save lives, keep families whole, and make Staten Island a healthier and safer place,” said Staten Island District Attorney Michael E. McMahon. “As always, we are incredibly proud to be working in partnership with the Staten Island Performing Provider System, Staten Island treatment providers, former-Congressman Max Rose, and the founders of The Secure Future Project, who all have shown tremendous leadership on this important issue.”

“The opioid crisis cannot be addressed alone. It takes allies,” said Brahim Ardolic, Executive Director of the Staten Island University Hospital. “During the COVID-19 pandemic, the opioid epidemic has burned in the background, and all of the data suggests that it will keep burning as we come out of the pandemic. We need to use that data to our advantage.”

Dr. Ardolic pointed to how predictive modeling like MIT’s algorithm has been successful in positioning ambulances in the community for better emergency response time after each call. Joseph Conte, Executive Director of the Staten Island PPS, said, “With this generous funding, our goal is to design and implement an evidence-making program that will contribute to attacking the substance use disorder problem on Staten Island and beyond.”